We’re all very excited about 3D printing and the potential it has to change our lives. When it first received widespread media coverage 5 years ago everyone imagined essentially having their own mini-factory in the home able to print any desired material object at the press of a button.

The head of the most powerful office in the world, at the time President Obama, even embraced 3D printing in his 2013 State of the Union address when he proclaimed, of the National Additive Manufacturing Innovation Institute in Ohio, “A once-shuttered warehouse is now a state-of-the art lab where new workers are mastering the 3D printing that has the potential to revolutionise the way we make almost everything.”

So, what has happened in the world of 3D printing since then?

The hype surrounding the technology has come crashing back down to earth owing to the realisation of the many hurdles that must be overcome before we see a 3D printer in every home. The graph below lists the share price of Stratasys, one of the key players in the manufacturing of 3D printers, and tells a story reminiscent of the dot-com bubble: 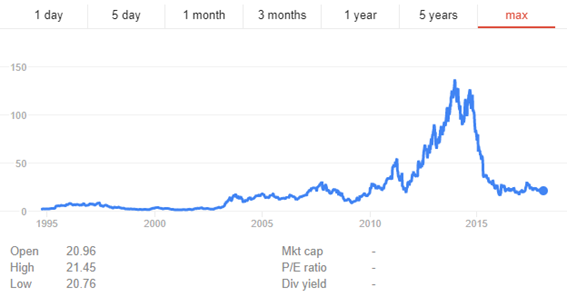 That’s not to say there isn’t a market for the home consumer, but a very basic plastic-printing 3D printer model will set you back several hundred pounds and the better models will cost upwards of several thousand pounds, and this is before the added expense of materials and maintenance.

And even these printers are generally intended for printing prototypes of products due to their many limitations such as each printing in just one type of material, having difficulties with hollow objects, or printing objects with a poor-quality surface that requires finishing. Advances  are being made, but these are perhaps best observed in the many industries and research organisations in which 3D printing is being deployed.

In the 2018 Winter Olympics in PyeongChang, Stratasy’s aided the design and manufacture of the USA Luge team’s sled with Fused Deposition Modelling (FDM) 3D printing technology, helping the country to their first ever medal in the men’s singles Luge (Chris Mazdzer – Silver).

Additionally, snowboarders using CAPiTA’s snowboards have profited in PyeongChang, the boards having been enhanced with FUS3D 3D printed sidewall technology. Furthermore, a collaboration between Belgian additive manufacturing specialists Materialise and Swiss boot designer Tailored Fits in August last year saw them 3D printing custom insoles for ski boots in time for PyeongChang much to the benefit of the wearer.

3D printing has revolutionised healthcare, used in the planning of surgical procedures and for building implants and prosthesis. Research is ongoing in the field of 3D bioprinting, whereby biomaterials and small units of cells are dispensed to form tissue-like structures with micrometre precision, for applications including artificial organ generation, drug discovery and in vitro disease study.

Archaeologists are also employing the technology to greatly enhance their forensic reconstruction capabilities. Just recently the University of Athens revealed the face of a woman who died nearly 9,000 years ago at the age of 18, whom they aptly named Avgi, the Greek word for Dawn. A team of archaeologists and medical experts scanned her skull, which was unearthed back in 1993, and used 3D printing to produce a model of the skull that was then built on top of. This is not the first use of the technology in this field with 3D printing used in many other forensic reconstruction projects, including in a reconstruction of the face belonging to the 9,500-year-old Jericho Skull a year prior.

Even certain foods are now being made using additive manufacturing, whereby the ingredients are squeezed out layer by layer into 3D foodstuffs such as pizzas, pasta, chocolate and candy.

With all the above-mentioned applications of 3D printing, which is by no means exhaustive, the effectiveness of the technology can only rise, with cause-driven innovations continually being made in the design of the 3D printer, the materials they are able to utilise, and the scope of their use. As breakthroughs on the industrial scale will naturally fuel the ability of businesses selling directly to the consumer to break down the barriers they face, it seems inevitable 3D printers will develop into something every household will wish to own, something capable of replacing factories with individuals able to print out everyday goods.

Certainly, the ability to print out replacement body parts in your own home is the most exciting and life-changing of the many uses the 3D printer could be developed for.

When this envisioned revolutionary level will be reached remains to be seen. Moreover, whether this anticipated technological change will bring with it a tide of downsides, such as dissipating the line between home and the workplace and counteracting globalisation as some have predicted, or just the advantages others have foreseen, such as introducing economies of scope to developing countries, is unknown.

Progress in the field of 3D bioprinting especially has sparked many to warn that the technology carries important ethical concerns and regulatory considerations that are presently being overlooked. But what is clear is that 3D printing is already making in-roads into the development of our goods and services, and that the future of technology in the world in which we live is therefore intertwined with the world of 3D printing.